Celebrating the work of the voluntary sector 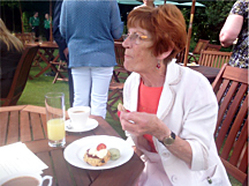 On a sunny afternoon on 12 July, Terri Pinegar, CORE Project Manager and Val Robinson, Trustee and card craft tutor, attended a Summer Reception at Caunton Manor by invitation of the Lord-Lieutenant of Nottinghamshire.  The event was arranged to recognise and celebrate the work carried out in the Voluntary Sector. It was an opportunity for the Lord-Lieutenant, Sir John Peace and his Deputies to thank people in Nottinghamshire personally for the valuable work they do.

Terri and Val represented The CORE Centre and were able to share experiences with other charity and voluntary organisations. Terri said “It was a beautiful summer’s day in idyllic surroundings.  We were treated to cool drinks on arrival, served by young military cadets, who were very conscientious and polite.  We mingled with other representatives on the lawns of the Manor.  The Lord-Lieutenant welcomed us all and we received a blessing and sang “Amazing Grace”.  Afterwards we were entertained by a marching brass band and invited to help ourselves to cream tea.  Many who were there, including Val and myself, were delighted by the house, gardens and stables, and whilst roaming, we enjoyed delicious home-made ice cream.  What a wonderful way to spend a summer’s afternoon!”

CORE Volunteer, Wendy, Wins Award for her Work in the Community

Wendy receiving her award from Mayor of Gedling, Bob Collis
We are delighted that one of our volunteers, Wendy, has been recognised with a community volunteering award for her services to the wider community.  This is one of the 4th Annual Pam Clipsham Volunteering Awards sponsored by Gedling CVS which honours community volunteers for their work.  The Mayor of Gedling presented the awards at a ceremony at Arnold Civic Centre on 10 October 2013.

Wendy’s nomination was in the category of “Community Volunteering” because of her work with a number of local organisations to enhance the quality of life for people in the community.  Wendy volunteers at the CORE Centre but some other groups that have benefited from her fund raising talent and support include British Legion, Calverton Working Men’s Club, Gedling Play Forum, Calverton Playday, SureStart, Touching Hearts, Neonatal Unit, City Hospital and Wards at Queen’s Hospital. An impressive list!

Wendy has a natural skill to communicate with, and a desire to help, the whole age range of the population.  She easily communicates with children and older groups.  For example she has worked tirelessly to make the Calverton Playday a great success which enriches the lives of the younger children in Calverton. She also helps with CORE’s weekly chair based exercise class which attracts senior citizens.  Her ability to persuade local businesses to contribute raffle prizes and other “in kind” help for her causes is astounding!  She is full of ideas to raise money for good causes. Wendy engenders partnership work at its best.  Her enthusiasm and community spirit is infectious to the wider society.

Wendy gives joy and happiness to people of all ages she helps.  In return she says she is a happier person herself.  Without her voluntary contributions the lives of residents in Calverton and the wider community of Gedling and Nottinghamshire would be so much the poorer.

If you can spare a few hours to volunteer at one of Calverton’s charities or community groups then be inspired by Wendy’s achievements.  We would love to hear from you.
Powered by